From LuxCoreRender Wiki
Jump to navigation Jump to search 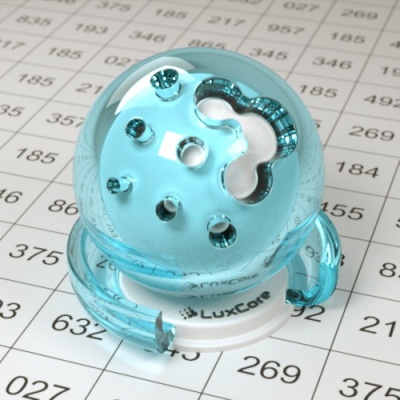 The index of refraction for the material. This value determines the overall appearance of the material, and should be set according to the material you are trying to simulate. In combination with dispersion (see below), it should be set with the Cauchy-A coefficient.

Dispersion means that the IOR is calculated as a function of the wavelength, i.e. the color, of light. Setting a value greater than 0 puts the glass material in a spectral mode. This will make rendering slower, but increases the realism by adding color effects.

LuxCore uses a two-term Cauchy-equation to model dispersion. Dispersion is measured by the Cauchy-B coefficient. Realistic values range from roughly 0.003 to 0.0015. For further information, see Glass Material IOR and Dispersion.

This is the color of light reflected from the surface.

This is the color that the light will be filtered to after being transmitted. The color given here will be applied to the material uniformly, you may wish to derive the color from the objects volume instead.

This allows you to define a film coating on top of the glass. This usually results in a rainbow colored reflection. It has two controls, a thickness and IOR. The IOR should match that of your film material (Cleaning solution, which can leave such a film behind, has an IOR of ~1.3-1.35, due to being almost entirely water). You can vary the thickness to achieve the desired effect. A thickness of several hundred nm will result in the most pronounced effect. 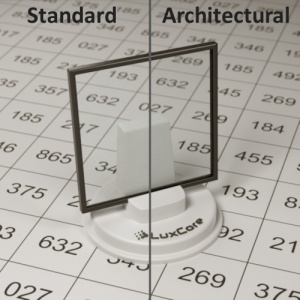 This option disables refraction during transmission. The effective result is that transmission will appear as though the glass had an IOR of 1.0, while reflections will use the specified IOR. The resulting glass will show only the transmission/reflection colors and volumes effects. You could enable this option for a thin sheet of glass such as a window. The render output difference will be minimal, and it will render much faster, as there is less to compute. However, disable it on any curved glass as it will make the object look fake.

There are several other important features to architectural mode, besides reducing the necessary calculations of the material. Because there is no refraction during transmission, architectural glass is transparent to shadow rays and alpha, neither of which is the case in non-architectural mode. This is especially important for window glass. Because it is transparent to shadow rays, it is possible to perform direct light sampling through the window to outside light sources, greatly improving the render efficiency. And because it reflects but still propagates alpha, it allows you to have realistic interior reflections and absorption on the windows, while still being able to composite in a backdrop for the view outside of the window.