LuxMark is a OpenCL benchmark tool. The idea for the program was conceived in 2009 by Jean-Francois 'Jromang' Romang. It was intended as a promotional tool for LuxCoreRender (to quote original Jromang's words: "LuxRender propaganda with OpenCL"). The idea was quite simple, wrap SLG inside an easy to use graphical user interface and use it as a benchmark for OpenCL. After Anandtech adoption of SLG as OpenCL benchmark, the code was finally written by David 'Dade' Bucciarelli.

After a year from the release, LuxMark v1.0 has been widely used as OpenCL benchmark by AnandTech, Tom's Hardware, Vr-zone and other sites. AMD has used LuxMark as one of the 5 GPU computing benchmarks to present the new HD7970.

LuxMark v2.0 includes SLG2 as rendering engine with Metropolis Light Transport, Multiple Importance Sampling, Image reconstruction done on the GPU, support for multiple OpenCL platforms (i.e. Nvidia users can use Intel or AMD CPU device) and many more new features. The new features rise the complexity of the benchmark of nearly one order of magnitude and it should be able to put some serious stress on the new generation of GPUs. The capability to submit results to a centralise WEB database looks like the most interesting new feature of LuxMark v2.0: http://www.luxrender.net/luxmark 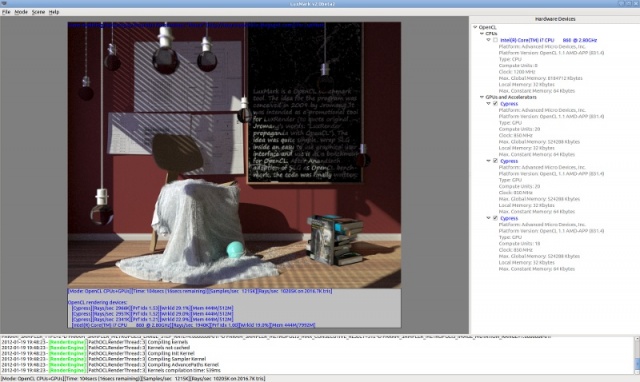 A special thanks goes to all people at LuxRender GPU Acceleration Forum that have contributed with end-less testing, hints, bug reports, etc.

LuxMark is release under GPL license. The sources are available at https://github.com/LuxCoreRender/LuxMark.

Room is a 2,000,000+ triangles benchmark. This scene has been designed by Mourelas Konstantinos "Moure" (http://mourelask.weebly.com/).

Note: Room scene is extremely complex and is available only on 64bit executables. Old and/or low-end GPUs may be unable to render this scene. 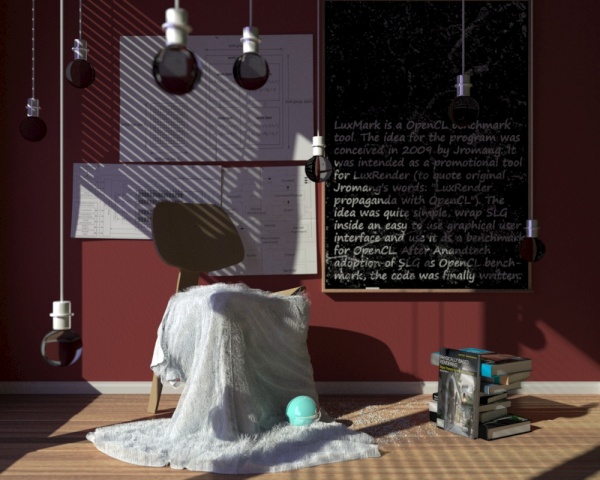 Sala is a 488,000+ triangles benchmark. This scene has been designed by Daniel "ZanQdo" Salazar (http://www.3developer.com) and adapted for SLG2 by Michael "neo2068" Klemm. 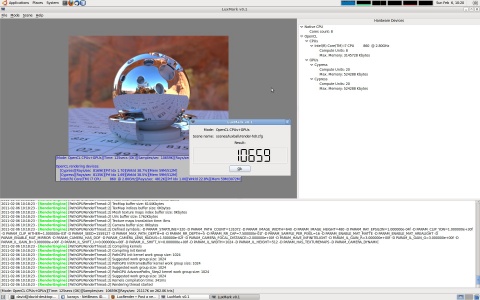 If you have a valid LuxRender forum account, you can submit your results to the LuxMark result database: http://www.luxrender.net/luxmark. The database offers online real-time browsing, searching, average results, top 20s and many more features.

Note: LuxRender forum account are synchronized with LuxMark database once every hour so new user accounts may take up to an hour to be active for LuxMark 2.0 result submission.